The Tale of Peter and The Squirrel (Part Two)

It sounded like a small animal, hyperactive and speedy. One that could be seen scurrying all day long outside the house.  After a thorough investigation and brilliant detective work we had a suspect: A squirrel, or two. Or maybe many.

Something had to be done. Either we or the squirrel had to move out of the house, or we would not sleep until next May.

Consulting with our salt of the earth, true New Englander neighbor and everyone else who had an opinion on the internet we found no clear, clean and safe solution.

Until the morning when Peter, who had been challenged if not eaten up by the question, greeted me with a mischievous and somewhat triumphant smile: “I came up with an idea! I am going to build it, a simple device that will produce a buzzing sound and I’ll put it against the wall near the bed and every time we hear the noise I’ll press a button and.. you’ll see it’s going to work.”

He was so excited!  To design and build a small, simple machine, using electrical components and just a few parts had been a never fulfilled childhood dream of his.

I never knew… Talk about deeply entrenched frustration for so many years!

I was so happy for him.

To tell you the truth I had long settled my squirrel problem with my own sure bet solution: sleeping through the noise and forget it. But I would never deprive my husband of absolutely unmitigated joy and anticipation over such a mighty and promising project.

Starting with rummaging in our garage and eventually on the internet, Peter, in no time, assembled and proudly presented me this nifty and ingenious little marvel: 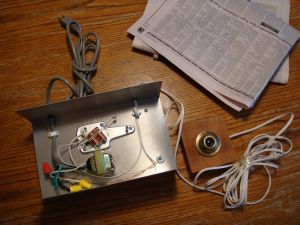 The button plate was going to be placed at Peter’s bedside and the box at my bedside against the wall where we presumed the noise was coming from. At the pressing of the button, the device would emit a buzzing sound that we hoped would rattle the squirrel and scare him enough to flee and abandon the premises.

That night we went to bed with the eagerness of a general who is about to conduct a mission that will annihilate his enemy forever. But not before we demanded our son, who was truly getting a  kick out of all this and kept on testing the machine, to leave our room and go to sleep.

I made believe I was asleep of course rather than point out the apparent inefficiency of the plan. I knew better.

I just offered my hand to hold under the covers in an attempt of quiet solidarity.

The squirrel resumed his activity, most likely only wondering what this buzz was all about.

The next morning, I was dreading the possibility of seeing my husband somber and tired but, ever the gentleman, he acted as if nothing was the matter and the night had been just fine.

We spoke no word about Operation Squirrel and just tacitly agreed to give it another try that night.

And the next night and the next one…Until Peter announced a few mornings later: “I think I have a better idea to make the buzzer work and if it doesn’t we’ll open the wall and bring the Shopvac!”

Now how would I be able to fall asleep next to the scene of utter devastation with a starving and homeless squirrel going out into the winter with no prospect of survival. Bad Karma. But I said nothing.

Next thing I hear: We have an appointment with the exterminator.

So fortunately we will never know how the squirrel was finally convinced to relocate elsewhere his winter quarters. Ignorance is bliss!

My husband is always the best at resolving problems and, as he says, he does this just to make me happy! It does. And for that, we have the best marriage…

The Tale of Peter And The Squirrel

Autumn. Nature prepares for winter. Animals and plants get ready for a long sleep in the quiet months of cold and dark.

Prepares…For some this seems to turn into a frenzy such as one would witness in a coastal town before a hurricane. I am talking about the squirrels who have been populating our garden for generations: the place being prime real estate equipped with three bountiful walnut trees, no pets and an old house with plenty of access holes.

Yes, plenty of access holes to cosy little shelters in the walls and eaves. Ideal for storing food and hunkering down for a few months.

One of those shelters is precisely located in the wall behind and next to our bed.

And we found out the hard way, for the little critters did not bother to give us prior notice of their moving in.

On a blissfully quiet night in late August, as my husband and I were deep in the realm of Morpheus, a sudden and very noisy racket startled us out of sleep .

What’s this? Can you hear it? Where is it coming from? Oh, it’s probably an animal running on the roof. Go back to sleep…

Yeah try: The noise intensifies, stops, starts again, erupts in various spots and seems to happen right next to our heads, our ears. We knock on the wall and for a few tense seconds of held breaths and immobility, it stops…and starts again, ensuing a futile waiting game that soon wears us out. The next option is to bury our heads under the pillow and ignore.

And so we do, careful not to remark on the dawn’s early light that forebodes the imminent wake up time.

You are currently browsing the Animals category at Marchand de Couleurs.