Beauty At Every Age

Ever since I can remember the wild carrot flower has fascinated me.

When I was very little I would pick, or more likely uproot, for their stem is very hard to break with small hands, just two or three by the side of the road and holding the unruly and wiry stems would bring this quirky bouquet to my favorite person. The emphatic reception adults reserve for children’s gifts would always fail to hide, among the compliments, a hint of disregard for this nothing flower. I could not understand why but never asked. 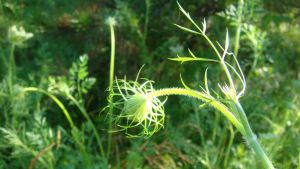 Growing on the neglected side of gardens and fields, among thistle and nettle, in the tousled grass,  with delicate and modest grace, never one like the other and always uniquely beautiful, the shy  plants would stop me in my tracks and I would stare at their infinite variations.

I did not know the meaning of  “weed” then. Wild carrot was a name for a useless vegetable and much too mean for such a damsel blossom. I thought the flower had been forgotten as such.

Much later, after having lived in a city for many years and then moved to rural New England, I found it again. It was like running into an old friend. One that never called but had always been there.

How delighted was I to find that it finally had a proper name , Queen Ann”s Lace. Indeed modest and delicate but perfectly noble and regal too. I wanted to plant it in my garden, along with foxgloves, peonies, poppies, delphiniums and lilies. But no garden store would sell such a seed: I was “an invasive species”. I was disappointed and angry. It seemed once again that its beauty was ignored. 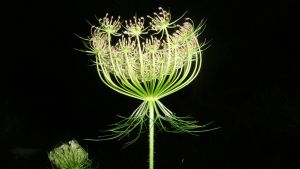 Every summer I follow the life of my beautiful flower and every summer, as I am getting older, it reminds me that there can be beauty at every age, with little artifice and infinite variations.

As long as there are roads, trails, highways and paths to let it grow.

You are currently reading Beauty At Every Age at Marchand de Couleurs.