Through The Texas Panhandle

Back on the road today, we drove from Austin to Abilene to Lubbock in the Texas Panhandle. At last, away from the Interstate, the road was quiet and the landscape peaceful. The sky was overcast with heavy rain or drizzle so we got to see Texas in unusual weather.

On Highway 84 near Abilene 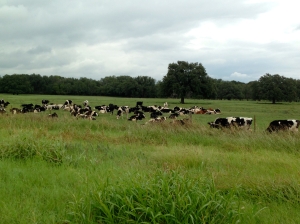 Peabody’s restaurant in Goldthwaite was a bet but it turned out to be a great find. The place looked like a modern concrete and steel barn, industrial decor at its most authentic, where farmers on lunch break where catching up on the topic of the week: the rain!

We could have been in 1970, 80, 90, 2000 or now, no way to tell for sure. Best choice on the menu: a juicy, fluffy slice of meatloaf made by the wife of the restaurant’s buffet server, with ‘tatoes and white gravy, corn bread and glazed carrots…. and mmm, it was good! 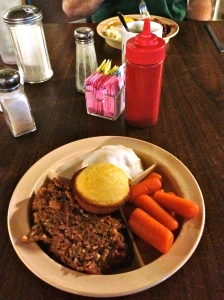 Later, back in the car, my husband woke me up around Roscoe to see that we were driving through what turned out to be one of the largest wind farm in the world. We would have never thought that in the Oil State alternative energy projects were also Texas size!

The landscape changed as we neared Lubbock. Oil wells with their dutiful jack pumps bowing regularly appeared all around us in the middle of backyards, cotton fields, parking lots and abandoned plots.

And in Lubbock, after a steak dinner and

as there was not much else to do, we finally checked in for the day,

but not before taking one or two last pictures, in Red, White and Blue! 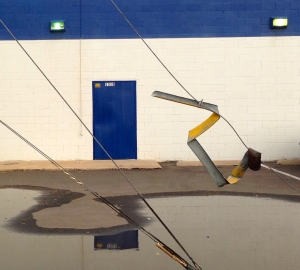 § 2 Responses to Through The Texas Panhandle

You are currently reading Through The Texas Panhandle at Marchand de Couleurs.